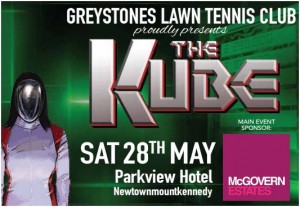 Greystones LTC is hosting a major fundraising event – the KUBE sponsored by McGovern Estates – which pits contestants against each other in a game of  balance and dexterity in a fight against time!

Being held on Saturday 28 May in the Parkview Hotel in Newtownmountkennedy, this is the only KUBE event which will be held in the Greystones area.  The KUBE will be officially launched at Greystones LTC on Thursday 5 May.

TAKE PART AS A CONTESTANT

ADVERTISE AND SPONSOR THE KUBE

This is the only KUBE event in the Greystones area and there are sponsorship and advertising opportunities for local businesses. We are looking for:

ATTEND THE LAUNCH NIGHT ON THURS 5 MAY

Club members, friends and contestants are welcome to the official launch night of the KUBE on Thursday 5 May in Greystones LTC at 8pm. The evening, sponsored by Alan Perkins’ Phoenix Travel, promises to be a night of drama as the heats are revealed and contestants find out who they will be pitched against on KUBE night. A selection of games for everyone to try out will also be part of the fun!

SUPPORT THE KUBE NIGHT on SAT 28 MAY

All are invited to the KUBE night on Saturday 28 May to support Greystones LTC and their favourite contestant. Tickets only cost €15 and are available to purchase from Greystones LTC bar, office and club members. Doors open at 7pm for an 8pm start.

FIND OUT MORE – Contact Nicky Brooks on 086 353 2931 or email thegreystoneskube@gmail.com