All are invited to Greystones LTC for an American tournament, BBQ and to witness the handover of the famous Kim Clijsters skirt, worn by our mens’ captain Chris Quinn at Wimbledon, to Greystones Theatre.

The event, which will be held on Friday 8 September from 7.15pm, the eve of Greystones LTC’s Senior Tennis Open, will include: 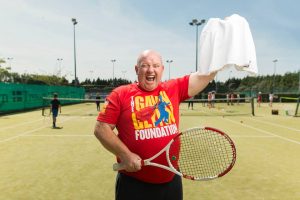 Chris and his famous Wimbledon skort at Greystones LTC

The skirt, generously donated by Chris, has raised a whopping €6k for The Gavin Glynn Foundation – €3k from Greystones Theatre, the highest bidder and €3k from sports clothing brand, Fila, who kit out the lovely Kim, and matched that.

Tickets can be bought at: