So Chris Quinn dons Kim Clijsters skirt and becomes a global internet sensation – how did that happen???

Let’s start at the beginning….Chris Quinn, our mens’ captain and his friend Marcus Naylor got tickets to Wimbledon through the Wimbledon lottery. Ladies semi final Thursday, tick; decide to spend an extra day there and watch ladies legends play doubles on Friday afternoon before you head for your flight, tick!

Kim Clijsters is serving and the four times Grand Slam Champion and former ladies world #1 asks the crowd where she might serve. A spectator in the crowd, (that would be our Chris), pipes up that she might try a “body” serve…. And thereafter events start to get really interesting…

Kim invites the “heckler” i.e. Chris to come on court to receive serve…the “young man” Chris is eager to comply and quick as a flash is out of his seat and onto the court! Unfortunately (or maybe fortunately as it happens) Chris’s green t-shirt and blue shorts don’t quite comply with the Wimbledon all whites standard. Not to worry the lovely Kim remembers she has a spare white skirt in her bag…and so begins a story that makes Chris the subject of Wimbledon’s most watched video (ahead of Rafa bumping his head when he does his kangaroo jump) and the talk of the world wide web!

The video and commentary are brilliant and all we can say is fair play to Chris for playing his part in bringing such a great feel good story to the world! We loved it!

As we write some 4 days later the video has been watched by millions of viewers worldwide, shared, covered in newspapers around the globe – New Zealand, India, the USA, Germany, the UK and Ireland to name a few – covered on TV and radio and Chris has been interviewed by media in Ireland, Australia and USA. He’s even shared a couple of headlines with the great Roger Federer! 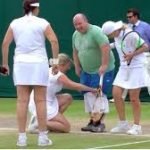 Chris doesn’t mind as Kim helps him with her skirt 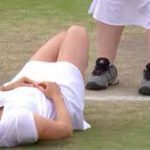 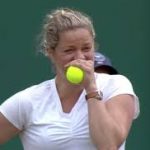 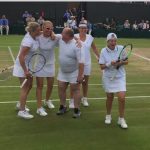 Chris Quinn with the ladies legends at Wimbledon 2017

Chris gets a big hug from Kim Clijsters 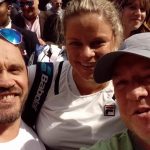 Chris Marcus have a selfie with the lovely Kim Clijsters

Best of all Chris is very generously auctioning the skirt for the Gavin Glynn Foundation, a fantastic local charity.  Bid for Kim Clisters’ skirt/skort as worn by Chris Quinn on Wimbledon online until 28 July 2017 at 1pm