Ladies – another successful chick league – 76 entries and around 100 matches played over 5 weeks. Well done to all participants and well done to the top scorers in each chick league group. The overall winners were….

*******EVERYONE GETS A PRIZE******
The lovely baskets for the winners were sourced from Ailish’s mom at Bomar Aromatheraphy in Kilcoole. Bomar also sponsored a Christmas oil for the captains and a coconut melt body balm for all participants. If you haven’t collected your prize it is available at the bar for the next few weeks. 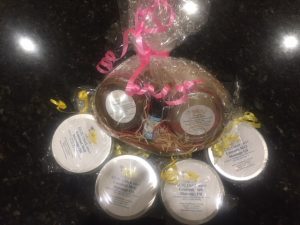 Many thanks to Ailish for organising this competition and thanks to Nicola and Kathy for helping on the groups. The captains were fantastic for keeping the groups on track – Susan Hayes, Catherine Allen, Nicky Brooks, Lotte O’Sullivan, Emma O’Brien, Wendy Lee, Anne Quigley, Teresa Saul, Moira Moloney.

We may have a Spring Chicks competition – watch this space. And of course there will be one again in the run up to Christmas 2018.