Monday 15th  June 2015 – Monday Night Social Tennis, saw a new name on the Butler Cup.  After some very pleasant “friendly” Mixed Doubles the overall winner was announced. Congratulations Michael Relihan. Everybody who played received a small gift and enjoyed some tasty Pizza’s and drinks afterwards.  Overall there were 100 entrants in this years tournament which ran over 37 Monday nights, there was an average of 22 players each night. Captain Monday thanked everybody for their support to the event and reminded all players that Monday Night Social Tennis runs throughout the year starting at 8.00.

Captain Monday would like to express his sincere thanks to all Monday Nighters’ who contributed to his very special gift. – Thank you one and all. 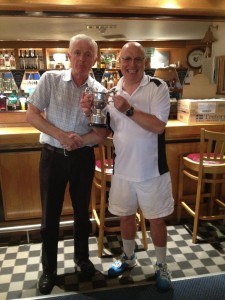